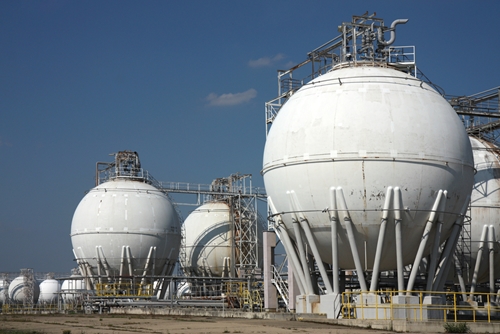 The announcement comes after nine workers suffered fatal illnesses related to hydrocarbon gas exposure and/or oxygen depletion in nine separate incidents from 2010 to 2014. OSHA believes the common factor in each of these deaths was the task the worker was performing. All nine fatalities involved manually gauging or sampling production tanks at oil and gas well sites.

"It has been known for years that oil and gas extraction is extremely dangerous work, with high rates of workplace fatalities," Assistant Secretary of Labor for Occupational Safety and Health Dr. David Michaels said in a statement. "We also know that every incident is preventable. It's critically important that we all work together to make sure that oil and gas extraction workers are aware of life-threatening exposure to hydrocarbon gases and vapors and low oxygen atmospheres, and that they are protected."

New safety protocols
The new alert provides specific recommendations to protect workers who are opening tank hatches to manually gauge or sample hydrocarbon levels. As OSHA noted in the alert, when workers open production, flowback, or other tanks, hydrocarbons including methane, ethane, propane and butane can be released as liquids, gases or vapors. Additionally, vapors may contain pentane, nexane, benzene and xylene. All these hydrocarbons are considered volatile organic compounds and have been associated with immediate health effects, including loss of consciousness and death.

OSHA and NIOSH now recommend employers take several additional steps to protect workers, including making sure workers are not alone while gauging or working around the tanks. The agencies recommended using remote gauging or sampling of the tanks whenever possible. However, if workers must be opening or working around tanks they should also be provided safety equipment including a supplied air respirator or a self-contained breathing apparatus.

The alert also identified several circumstances that can increase the risk of hydrocarbon exposure. These include operational and task-related factors, such as:

Additionally, the alert said environmental factors including higher temperatures, weather inversions, higher altitude and low wind speed increase risks. The characteristics of the fluids in the tanks also contributes to the amount of hydrocarbons they produce. For example, condensate and lighter crude, as opposed to heavy crude and unstabilized (non-degassed) crude oils will come with higher exposure risks.

Additional precautions
Although the alert advised employers should implement these precautions, doing so does not eliminate all risks associated with hydrocarbons.

"Companies failing to implement these recommendations will be at 'high risk' for OSHA citations."

"Hydrocarbon gas and vapor emissions from production and flowback tanks are wide-ranging," the agencies said in statement. "Consequently, it is difficult to predict the magnitude of risk from any specific gauging or sampling task."

Speaking with Business Insurance, Alex Beaver, a consultant in Liberty Mutual Insurance's national insurance specialty division, said the oil and natural gas community needs to work together to improve worker safety. Beaver noted that switching to remote tank gauging is not a quick or easy process.

"It's going to take not just one company to come up with a proper, effective and efficient engineering control to remotely sample these tanks," Beaver said. "It's going to be an oil and gas community effort."

Beaver added compounds exposure is still an emerging risk for the industry, and one that will require further study and likely additional recommendations for reducing risk. He further advised smaller oil and gas companies should find financial partners to help implement these new safety procedures.

Business Insurance also noted companies failing to implement these recommendations will be at a "high risk" for OSHA citations. Though the agency does not have a standard that is directly applicable to this situation, OSHA inspectors can still issue citations under the general duty clause – which requires employers to furnish all employees with a place of employment free from recognized hazards that are causing or are likely to cause death or serious physical harm to his employees. Now that this alert has been issued, hydrocarbon exposure will likely be considered a recognized hazard. OSHA also noted all worker fatalities related to hydrocarbons are highly preventable when proper safety precautions are utilized.