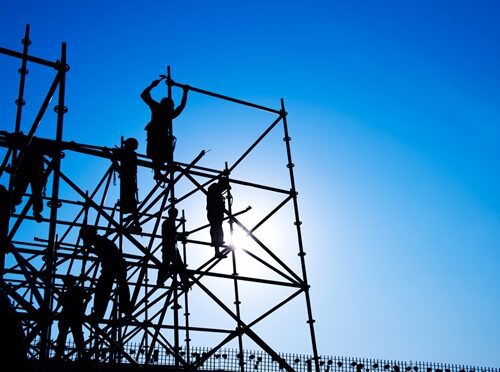 Employers should pay close attention to fall protection standards as fines on the Occupational Safety and Health Administration's most frequent violation will be going up in 2016.

Violators are already seeing heavy fines in the new year. A Litchfield, New Hampshire-based contractor will face more than $100,000 in fines from OSHA for failure to properly protect his employees from falls and other hazards.

Additional violations led to the contractor's company being placed in the OSHA's Severe Violator Enforcement Program. According to Rosemarie Ohar Cole, OSHA area director for New Hampshire, the contractor knowingly and needlessly refused to follow basic safety procedures by not providing employees with legally required safety equipment, placing them at risk for serious injury or death.

In addition to a lack of fall protection, the contractor was cited for placing scaffolding too close to a live, 240-volt electrical line; providing inadequate scaffolding access; using ladders on top of scaffold platforms and failing to provide fall protection training.

Additionally, OSHA issued a willful violation with a proposed penalty of $70,000 after a Philadelphia-based construction company failed to provide fall protection for employees who were working at heights exceeding 25 feet.

The company's owner had been previously cited for safety violations relating to scaffolding and exposing employees to electric shock.

As a result, OSHA may be making some changes to the standard in the near future. As Bloomberg BNA reported, OSHA had submitted a draft recommending revisions to workers' fall protection requirements, though that draft was withdrawn in late December before it could be reviewed by the White House's Office of Information and Regulatory Affairs.

"Violators should expect to see fines 80 percent higher than in 2015."

The proposed changes would have addressed walking and working surfaces and personal fall protection systems for construction and maritime workers. Though OSHA did not comment on why the draft was withdrawn, Bloomberg noted it's not uncommon for new regulations to face multiple revisions and it is likely the proposed changes will be resubmitted again soon. Speaking with Bloomberg BNA, OSHA spokesman Brian Hawthorne said the agency is committed to having the revision published in 2016.

Fine increases likely
As Smart Business reported, violators of the fall protection standard and other OSHA regulations should expect to see increased fines and longer, more thorough inspections in 2016. OSHA's new budget removed an exemption from the Federal Civil Penalties Inflation Adjustment Act of 1990 that had previously prevented OSHA from adjusting its fines to account for inflation. As of Aug. 1, 2016, violators should expect to see fines 80 percent higher than in 2015, with yearly adjustments for inflation to follow.

Additionally, OSHA announced it will overhaul its inspection process to be more rigorous, meaning companies should expect to see increases of multiple violations.

According to Smart Business, industries with higher accident rates, including the construction industry, should expect to see more frequent and stringent inspections in 2016. Regions where violations are more common will also see increased OSHA attention.

Companies seeking to avoid increased fines during these more detailed inspections should review all safety regulations governing their industry and be sure to come into compliance. As Smart Business advised, analyzing industry trends and news will help companies to be aware of common OSHA violations, as well as frequent sources of injury specific to their sector. Safety procedures designed to address these common hazards can then be put in place.